Prague Castle District – A Czeched Window to the European Realm 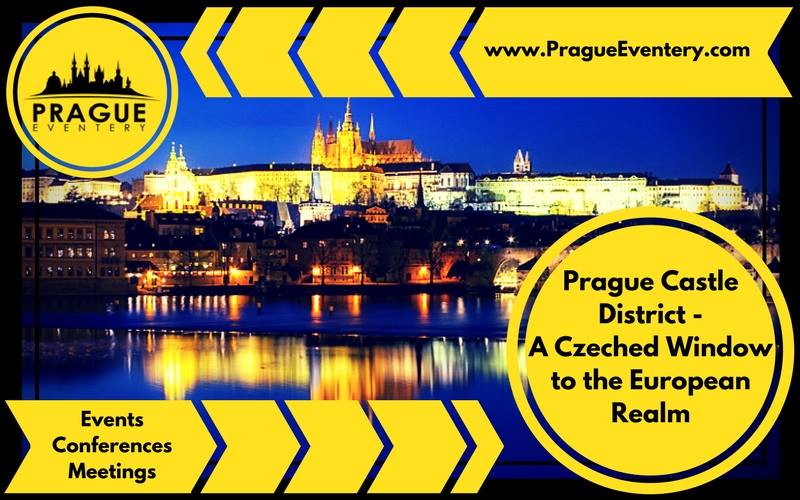 Being one of the most significant sights of the Czech Republic’s capital, the Prague Castle is highly visible from a long distance residing on a hill above Vltava river. The Prague Castle District has got the largest coherent castle complex in the world. Apart from being a symbol of ancient Prague history, it is also the official residence of the President of Czech Republic. Since its inception, Prague Castle has been developing uninterruptedly during the last eleven centuries. During the reign of Charles IV, Prague became the capital of the Holy Roman Empire. Charles wanted Prague to be one of the most beautiful cities in the world and also the most dominant city in the entire Roman Empire.

Blending History With the Present

The Prague Castle was established in 870 by Prince Bořivoj, who was the first historically documented member of the Premyslid dynasty. The history of Prague Castle initiates with the creation of its first stone building, known as the Church of the Virgin Mary. The second church in Prague Castle complex is St. George Basilica which was created by Prince Vratislav I. By the end of the 10th century, Prague Castle became a significant place. Because then it was not only the domicile of the head of the state, it also became the seat of the Prague Bishop. During that time, the Prague Castle occupied a space of six hectares. The castle was then remodeled again in the form of a medieval castle during the Romantic era and it kept developing.

During the Gothic era, there were spectacular changes in the appearance of the Prague Castle. The castle was an imperial residence for the first time during the reign of Charles IV who was the King of Bohemia and the Holy Roman Emperor. The celebrated ruler strengthened the castle fortifications and some of the roofs were covered with gold-plated metal sheets. Once again in the Renaissance period, the Prague Castle design was modified which enhanced the glory of the Prague Castle. Today, after several hundred years of fascinating history, the Prague Castle is the seat of the Czech President. Apart from that, the place is also the most significant National Cultural Monument of the entire Czech Republic. It is also a place of storage for innumerable priceless art relics. It clearly reflects the importance of Prague Castle District in the European history.

The Prague Castle District has been a part of numerous historical eras. This UNESCO World Heritage site consists of different large-scale ecclesiastical buildings and palaces of different architectural styles, starting from the remains of the Romanesque-style buildings erected in the 10the century which went through Gothic, Bohemian and Renaissance modifications. So, if you want to get the feel of the Prague Castle District, then you shouldn’t miss out the following places.

Old Royal Palace: The original Royal Palace was established in the Premyslid dynasty in the 9th century and it was made of wood. With the emergence of a Bohemian era in the 12th century, modifications in architecture styles started setting in. During the Bohemian era, the Old Royal Palace was recreated in the form of a stone Romanesque palace of Prince Soběslav. On the site of the Romanesque palace chapel, Petr Parler created the All Saints Church in the 14th century. This was the time of Renaissance era and not only the Prague Castle District but the whole Europe flourished during that period. During the Renaissance period, the Vladislav Hall was added to the old town castle which is being used even today for large public events of the modern Czech state.

Prague Castle Palace Gardens: The Prague Castle District complex has a streak of beautifully connected historical gardens which include Kolovrat, Ledeburg, Small and Large Palffy and Small Furstenberg Garden. The excellent architectural elements like the garden-houses, scenic terraces, balustrades and a lot of other decorations are absolutely mesmerizing. The Royal Gardens is yet another landmark created during the Renaissance era which truly offers a serene and peaceful atmosphere. In the Southern Gardens, you can check out the St. Wenceslas Vineyard along with its landmark, the Villa Richter. The Villa Richter is a classic summerhouse which was cultivated by Prince Wenceslas, the patron saint of the Czech nation.

The Picture Gallery: There is a permanent exhibition in the Picture Gallery at Prague Castle District. The gallery offers a collective showcase of European paintings from the 15th to 18th century. The collection of paintings is mostly from the Renaissance period which brought a massive change in the painting style. The Renaissance styled paintings and architecture were much more lively and naturalistic than the paintings and artworks of previous eras. This is the oldest Picture Gallery in the entire Czech lands which portrays numerous works from popular Rudolfine Collections.

St. George’s Basilica: St. George’s Basilica is the oldest surviving church building present in the Prague Castle District. The basilica was founded by Vratislaus of Bohemia in 920 which was rebuilt after a major fire took place in 1142. This Baroque façade is created in a complete Gothic style dedicated to saint Ludmila of Bohemia. The building houses the 19th century Bohemian Art Collection of the National Gallery in Prague. Unfortunately, the building is not completely preserved today, but you can still see different parts of the building and to get the feel of the Bohemian Art and Paintings. At present, the appearance of St. George’s Basilica is Romanesque. The interior of the building is austere and monumental.

Rosenberg Palace: The Rosenberg family was one of the most significant and influential Bohemian noble families in European history. The family played a vital role in the Czech medieval history from the 13th to 16th century. The members of this family had extremely influential posts in Prague Royal Court and they were viewed as one of the most powerful lords of the Bohemian Kingdom. The Rosenberg Palace was created by the Rosenberg family in the 16th century and became the property of emperor Rudolf in 1600. The building retained the Bohemian architecture and design until the 18th century. Then it was totally reformed and rebuilt into the Institute of Noblewomen founded by Empress Maria Theresa. It became a home for aristocratic ladies fallen on hard times. Between the years 1996 and 2007, the Rosenberg Palace was completely renovated in a Baroque look. At present, a part of this palace, showcases an exhibition about the life of the Institute of Noblewomen.

Golden Lane: The Golden Lane is a street situated in the Prague Castle district which was originally built in the 16th century. It was initially a place to house the castle guards of Rudolf II. The name of this street was such because a lot of goldsmiths used to live there in the 17th century. Today, the lane is a small part of the Prague Castle District where you would get to see different small houses painted in vibrant colors. Many of the houses have become souvenir shops now. To get the feel of wars and battles of the European history, you can visit the museum of the medieval armory present in the former 14th-century fortification and it is accessible from the Golden Lane. The Daliborka was built by Prince Vladislav in 1496. It is a tower at the end of the Prague Castle which organizes a small display of the torture techniques used towards the prisoners.

Did you know about the term ‘defenestration’? Well, if you didn’t, then know that the word means throwing someone out of the window. The word was invented after an incident took place in Prague Castle District in 1618. A year prior to that, a few Roman Catholics shut down a pair of new Protestant chapels. Angry with this incident, the Protestant rights defenders called for a trial within the council room and they won. What happened next, was the reason behind the origin of the word ‘defenestration’. The Catholic regents and their secretary, both were found guilty of violating the rights of religious freedom, and they were shoved out of the window.

The crown jewels present in the Prague Castle District are extremely well secured. The Bohemian Crown jewels include St. Wenceslas crown, the royal scepter, and the coronation cloak. Both the chamber doors and iron safe inside have seven locks and seven individual people including the Prime Minister, President, and the Prague Archbishop, have the keys. Only the President has the power to bring the crown jewels for public display every five years ago.

Reinhard was a crucial Holocaust organizer, who held court at Prague Castle. He was assigned by Hitler, because Hitler wanted to rule the people of Czech Republic. Heydrich set up a campaign of executions and disappearances. People who were against Hitler, were either executed or they disappeared surprisingly. The terrified Czech people nicknamed him as the Butcher of Prague. The Czech government officials decided to take action and Operation Anthropoid was activated to assassinate Heydrich.

Prague Castle District as an Integral Part of European History

The Prague Castle District is a castle complex, where the castle is the official residence of the President of Czech Republic at present. Throughout the European history, the Prague Castle has been the seat of power, starting from the Holy Roman Emperors, Kings of Bohemia to the Presidents of Czechoslovakia. The Bohemian Crown Jewels are kept very securely inside a room of Prague Castle. The castle buildings represent virtually every form of architectural styles of the last millennium.